Miami Township, Ohio needed help getting their budget under control

In March of 2015 when Miami Township in Montgomery County, Ohio hired a consulting firm to assess its public works department, the focus was initially on financials. How could the department balance its budget and better utilize its resources in the wake of recession-induced staffing and funding cuts?

During the assessment, it became clear that the department could be organized better, from logging staff time on projects to centralizing records. This would maximize efficiencies and ultimately save the department — and taxpayers — money. As it turns out, PubWorks was key to realizing those efficiencies.

Miami Township’s public works department had been using PubWorks since 2006, but its four sub-departments also used a mix of spreadsheets, manual log books, and software programs to keep track of various parts of its operations. It was a piecemeal system that didn’t allow managers to see the whole picture without putting a lot of time and effort into pulling together various pieces of information.

But the whole picture is exactly what Edward Livesay of Mosaic Strategic Partners wanted to see during the firm’s organizational assessment.

“If you don’t have all the data, it’s hard to know where to start let alone how to move,” said Livesay. “And the lack of real data tends to foster multiple conflicting perspectives on what’s really going on, such as how long it takes to do catch-basin expansions, potholes, or brush cutting. So we cleaned up the data and had lots of dialog to get everybody on the same page. But it also solidified the idea that we can’t go through this effort on every issue.”

Pulling together all the requested information “was a huge headache,” said Adrianne Bell, administrative technician for the public works department. “But there wasn’t anything that he asked for that we couldn’t run out of PubWorks. And if there was something I couldn’t figure out, by the end of the afternoon PubWorks was able to create it for me.”

In the end, one of Livesay’s main recommendations was to centralize virtually all of the department’s information in PubWorks. That includes anything and everything to do with the department’s 18 staffers: what crews they’re on, time per project, and basically tracking every hour of every full-time, part-time, and seasonal employee. When vehicles and other equipment are input, the department can analyze their productivity over time. PubWorks keeps track of every project on every street in the township, including when it was last resurfaced and what type of material was used, providing a complete road history that’s useful for planning and budgeting. Parks maintenance, stormwater systems, bike paths, and leaf collection projects are maintained with a similar level of detail.

“Now we’re doing whole systems in PubWorks — it’s kind of everything we do,” said Public Works Director Dan Mayberry. “It’ll be used as kind of a check-up to make sure we’re as efficient as we can be and spending taxpayer dollars wisely by maximizing our efficiencies.”

The amount of reports that can be run from PubWorks is almost infinite, explained Bell, “so I have one piece of information and can look at it ten different ways.”

Having that wealth of information is not only valuable internally, Livesay explains.

“This information impacts your levy and communication strategy,” he said, explaining that PubWorks’ capabilities offer a level of transparency the department didn’t previously have. By being able to pull out exactly what it would cost to increase parks department staff or repair streets that have been neglected due to funding cuts, department officials can now show township trustees and citizens that they’ve done their homework and are not simply looking for a handout.

“Levies are less likely to be passed if we just state the millage requested, ” said Livesay. “We believe you’ll be perceived better and achieve better results if you explain what you’ve accomplished so far, how you’ve saved money, exactly where the funds would go and how that would enhance your community. And that’s where we see the ultimate value of PubWorks.”

PubWorks also allows the public works department to be a more influential player in growth decisions as economic development ramps up in Miami Township. Livesay likens the economic development team to a sales force of a company, while the public works department is comparable to the service department. Often, he notes, sales doesn’t think about what services are needed to maintain a product. But PubWorks permits department officials to be able to explain exactly what it takes to maintain an acre of park land or a mile of bike path, and communicate what equipment and staffing would be needed. That is the true total cost of ownership and must be part of any development conversation.

The bottom line, concluded Livesay, was that PubWorks represented a paradigm shift within the Public Works department that enabled department officials to run their business better and make it more efficient, for years to come.

“Is there a silver bullet to help Miami Township improve an organization that’s already very strong? Yes, it’s PubWorks,” he added. “Whether it’s incremental improvements or applying the principles of lean and Six Sigma, you need good data as the foundation. You need one version of the truth. The whole country, if not the whole world, is trying to be more efficient, and PubWorks is a great tool that can help you do that.”

“Pulling together all the requested information ‘was a huge headache.’  But there wasn’t anything that he asked for that we couldn’t run out of PubWorks.  And if there was something I couldn’t figure out, by the end of the afternoon PubWorks was able to create it for me.”

Now we’re doing whole systems in PubWorks — it’s kind of everything we do.  It’ll be used as kind of a check-up to make sure we’re as efficient as we can be and spending taxpayer dollars wisely by maximizing our efficiencies.

The bottom line, was that PubWorks represented a paradigm shift within the Public Works department that enabled department officials to run their business better and make it more efficient, for years to come. 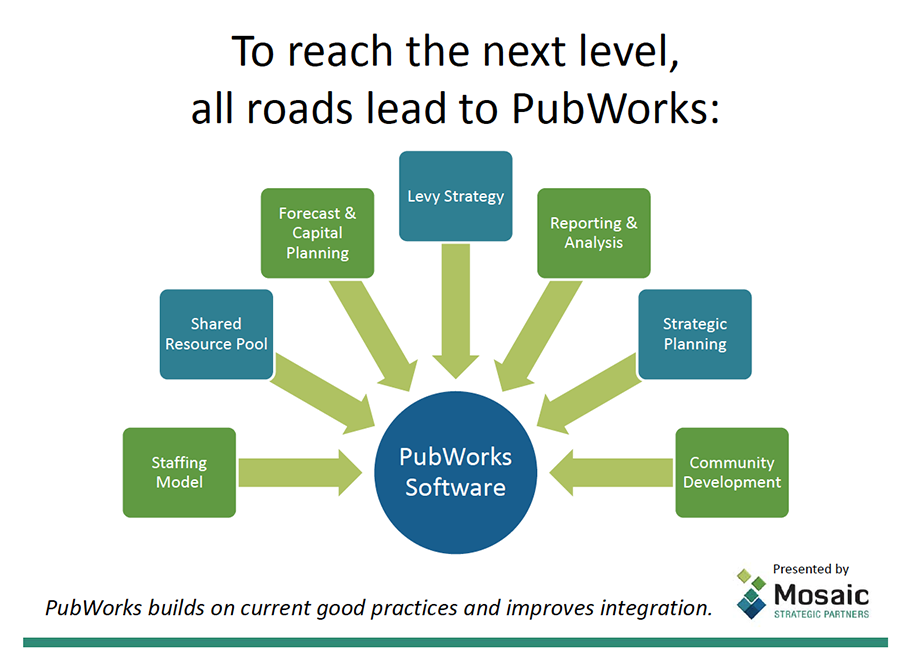 If you’re interested in getting PubWorks up and running quickly in your organization, join us for a FREE Demo.

On December 2nd, 2022 gWorks acquired PubWorks to bring a unified customer experience to small local governments. PubWorks will now operate under the gWorks brand. This acquisition marks a significant step for gWorks in its mission to broaden our geographical reach and to provide the most reliable and easy-to-use software solutions to empower small and medium-sized local governments. This partnership will create a company well-positioned to serve our mutual customers. Together, we serve 2,500 local governments across 48 states.

At gWorks, our vision is empowering public leaders to build smarter, more sustainable governments and stronger, more resilient communities with simple technology. Hundreds of local governments have trusted PubWorks’ Work & Operations Management Software. Combined with gWorks’ robust products and cloud-based solutions, we will be able to deliver a unified experience across front office, back office, and operations.

We don’t expect any immediate impact for current customers. gWorks does offer additional resources and products to guide you into new technology, make your organization more integrated, and to make your work easier, more efficient, and less time-consuming.

For more information about the acquisition, please view the full Press Release.

For more information about gWorks and FAQs, please check out gworks.com.