FEMA – When Disaster Strikes, Your Public Works Department Gets Busy

The Federal Emergency Management Administration (FEMA) has been busy lately cleaning up after a seemingly endless summer of disaster strikes.  The latest rounds of unpredictable acts of Mother Nature have kept our customers busy with clean-up efforts.  We thought it was fitting to post about how PubWorks is here to help you in your clean-up efforts.

In the first part we’ll tell you about some clients’ direct experience with FEMA disasters.  In the second part we’ll take you step-by-step through the FEMA recording process inside PubWorks.

“During Sandy, we entered all the individuals and equipment we were using, along with the FEMA scheduled rates,” he said. “Once that was in, each day as they went out to do work in the city, collecting debris or whatever, we’d track the trucks and equipment as it went out. We did that on a daily basis.”

Consider the 2013 floods that destroyed homes, roads and bridges along Colorado’s northern Front Range.  Ted Plank of Boulder County public works said, “Our crews worked seven days a week for the first eight weeks after the flood” to clear debris, rebuild roads and restore access to people’s homes, he said. “All of that work was recorded in PubWorks and submitted to FEMA for reimbursement.  All the main components of PubWorks are exactly what FEMA looks for,” Plank said.

Trevor Messbarger of Benton County, Arkansas, doesn’t know how he would have kept track of the 300-plus projects that he began as a result of the 2013 floods that struck his area. Bridges and sections of road were washed downstream when 10-12 inches of rain fell in two catastrophic days. But by giving all of those projects a particular code in PubWorks, he could track all flood-related repairs and, exactly as Boulder County did and apply to FEMA for reimbursement.

“This flood was unreal,” Messbarger recalled. “If we didn’t have this system to organize it … I don’t know. I would have hated to see it.”

PubWorks also demonstrated its value in 2007, shortly after the Reno County purchased the software, when federal flood disasters were declared and Tina McComb’s public works department had to respond. When the Federal Emergency Management Administration declares a disaster, it opens a pipeline for federal payments to cover the local agencies’ costs of responding to the event.

“PubWorks broke down each task that was done during the disaster, and then our FEMA reps chose which of those tasks could be reimbursed,” McComb explained. “Before (PubWorks) that would have been really difficult, if they’d even have been able to do it.”

When a FEMA disaster strikes, our customers know that PubWorks is with them during the clean-up and recovery process. Using the right record keeping system will make your life easier as you recover the funds necessary to make a complete recovery from a FEMA disaster.

Documenting work and job costs are a key strength of the PubWorks system. Use the five steps in this quick reference guide to help plan, prepare and mitigate FEMA Re-Imbursement Projects. 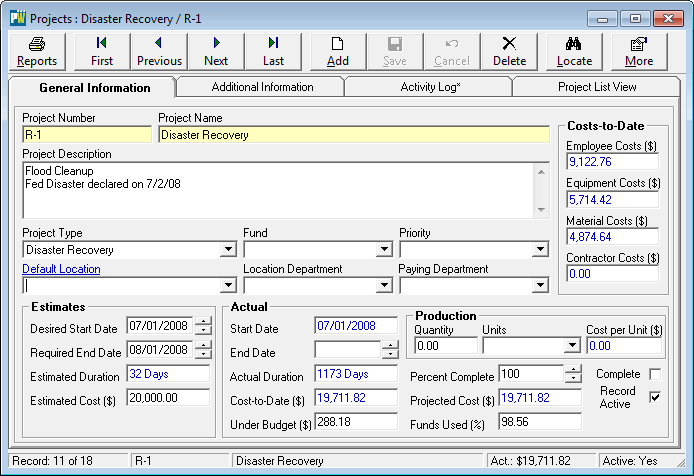 7. If you wish, enter the Desired Start Date. You might use the date of disaster declaration for the Start Date. Key in the date or use the special keys (T for today, Y for yesterday, M for tomorrow) or double click the date field to use a calendar.
8. Leave the Required End Date. Blank unless you know when the recovery efforts were declared complete.
9. The Estimated Duration will auto-calculate.
10. Leave Estimated Cost ($) blank.

11. The Start Date automatically populates based on the work that is logged.
12. Leave the End Date blank – it will auto-fill once the project had been marked complete.
13. The Actual Duration, Cost-to-Date ($), Over Budget ($), will auto-fill as Activities associated with this project are logged.

14. Leave these fields blank as a per-unit cost for a disaster recovery effort is generally unnecessary.
15. Click the Complete when all work for the project has been logged.
16. Active Record will automatically be checked when a project is created. Uncheck this box to deactivate the project record.
17. Click Save

Second, assign FEMA Codes and Rates to each piece of Equipment.

1. Click PubWorks Data and the click Equipment and then All Equipment. (Not Pictured)
2. For each Equipment record, key in the appropriate FEMA Identifier and FEMA Rate.*
3. Click Save
4. Repeat step 2 until all desired Equipment is possesses current FEMA identifiers and rates.

* FEMA rates, based on equipment class, can be found HERE. 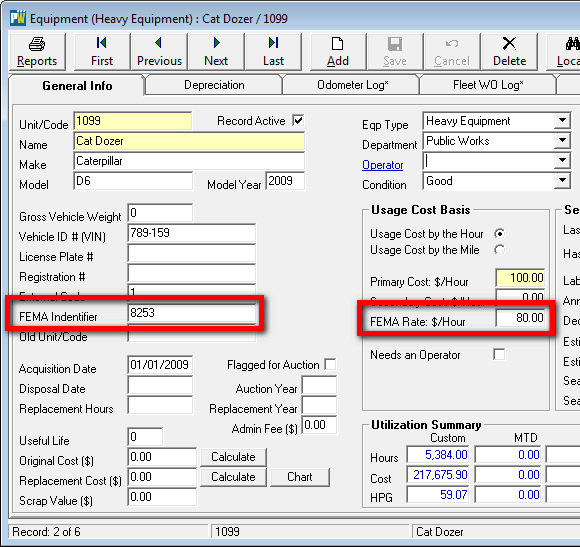 1. Click the System menu the click System Settings. (Not Pictured)
2. On the System Settings screen click on the Daily Activities tab set turn the Crew Activity Equip-Operator mode check box on.
3. Click OK to save this setting and close the screen. 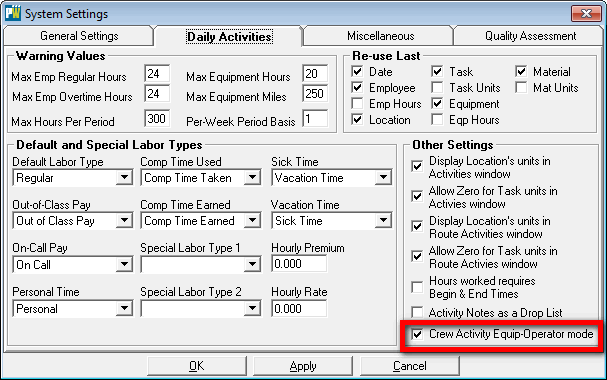 FOURTH, record work activities performed for the disaster taking care to you link these activities to the Project created in step one above. The lower left-hand corners of the PubWorks the activity screens possess a project drop down list from which you can select your disaster recovery project.

FIFTH, run the Comprehensive project cost reports to see the efforts and costs expended on the disaster recovery.

1. Click the Reports menu then Project Costs Reports.
2. From the Project Cost Reports screen select either the Comprehensive Summary or Comprehensive Detail radio button.
3. Select the Project you would like to report on.
4. Click Use FEMA Rates checkbox.
5. Click OK to print the report. 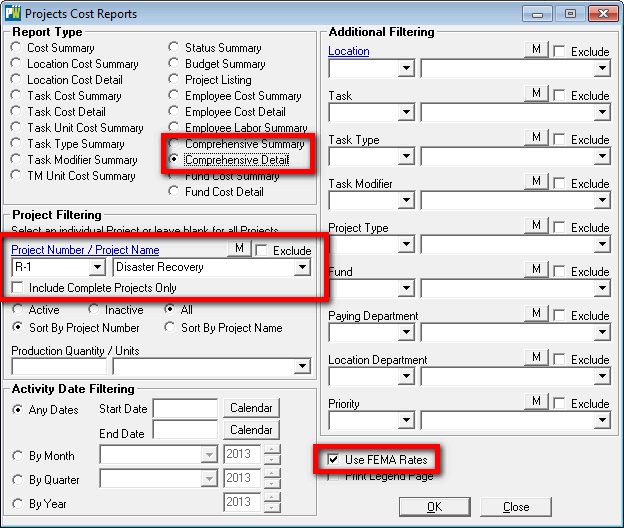